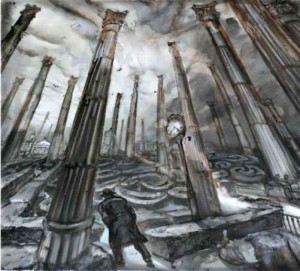 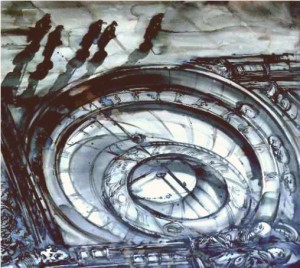 Slava Seidel, born 1974 in Krivoj Rog, Ukraine, is living and working in Frankfurt/ Main.
2009 Master Student of Christa Näher, Städelschule
2002-08 Hochschule der Bildenden Künste, Städelschule Frankfurt/ Main
1996 Work as a scene designer
1991-95 Studies in interior architecture, Rerich College, St. Petersburg
Slava Seidels paintings are surrealistic phantasies, which recall the "Groteschi" of Tintoretto, Goya and above all G.B. Piranesi. Her "impossible" architectures are the stage for manifold dream characters, who are beyond straightforward readability. The enigmatic scenarios develop a subtle symbolic power, which touch us to the quick - beyond all postsurrealistic banality. In her very personal style Seidel puts her "Dream Territory" with sepia onto the canvas, with an impressing skill and literally "somnambulistic" precision. 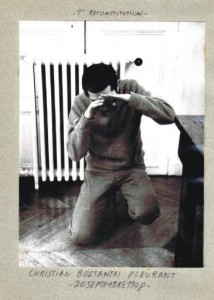 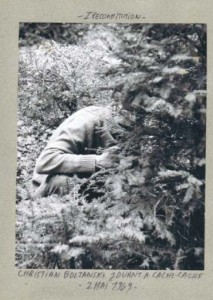 Christian Boltanski, known for his sculpture, photography, painting and film making, is a self-taught artist who began painting in his teenage years. In the 1970s his main concern was the medium of photography, he used the camera to record and convey his expression of early action, reaction and consciousness. With these pictorial presentations and accompanying texts he created the Reconstitution Series. During these formative years he was fascinated by the autobiographical, preserving in time his childhood endeavours. By re-living them as an adult they become more obscure and seem ridiculous when performed by an adult. Each pastiche is meticulously placed in time, noted and described as though the exercise is part of a scientific study. The reason for fixating on these particular experiences is not clear as the actions are seemingly mundane and average. It is almost as though he literally practices recording, indicating his said fascination with forensic science and preparing us for further works which serve as faux documents and refer to his own personal history or that of others. (auction description by Phillips de Pury, London)