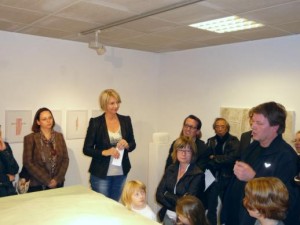 Yesterday this year's edition of "Wundertüte - Die Kunst in Tüten" started with large audience. Martina Eßer of WDR-TV opened up the exhibition with a charming moderation, describing the experiences round the "Wundertüte" from her very personal point of view. On the part of the participating artists Mulheim painter and sculptorer talked about his personal "wundertüte" history, so the gallerist's task was only to uncover the "Wundertüten"-table, to open the exhibition officially. Turbulent scenes happened, here some impressions: