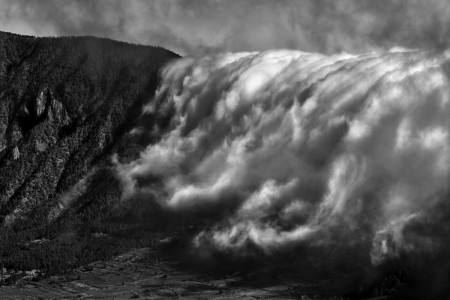 From October 11 to November 9 Obrist Gallery will exhibit selected works by renown Mannheim-based photo artist Peter Schlör. His recent works have a pictorial approach. The artist uses natural phenomena like the sea, clouds, mountains or forests, to achieve a painterly surface in his pictures: the different structures and consistencies assemble to abstract picture worlds.
In these works Peter Schlör detaches himself from the documental element of photography and devotes himself to contentual and aesthetic questions. For his photographs Peter Schlör awaits the moment when nature assembles in a perfect composition for his image structure. On the one hand it is the might of nature which he wants to capture; on the other hand these moments are chosen in a way that makes them resemble a painter’s brushwork. The very bulky, voluminous clouds in some of his pictures are precisely elaborated by the light. Cloud veils and misty haze, which are creating a poetic and often mythical impression, are applied specifically in contrast to the sharp outlines of forests and rocks. The deprivation of colors abstracts the motif from its reality and emphasizes the significance of the form language. Thus they are no longer reflections of nature but rather compositions of various surface impressions.
(Excerpts from a text by Dana Weschke)