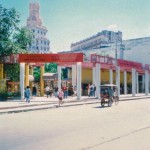 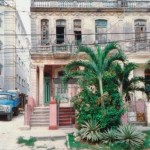 In his work of recent years, the Hamburger project artist Christoph Faulhaber always exposed himself: One of his most famous actions was carried out 2005-2007 is the project "Mr. Security", in which he and his colleague Lukasz Chrobok acted uninvited as a private security guard in front of U.S. embassies and consulates. Such actions and their documentation, Faulhaber permanently drew the anger of the U.S. Administration on himself - Refusal of entry and withdrawal scholarship inclusive. The debate about sovereignty and borders of public and private space flows with Christoph Faulhaber in the exploration of the limits of artistic freedom. For his now in the cor gallery zurich presented project Faulhaber becomes the broker and owner of the real estate company "Fidelity Real Estate", which offered various objects on the Caribbean island of Cuba for sale. The glossy brochure and presentation of traditional real estate advertising disguised as work does not conceal the irritation that arises quickly: Image and Image caption do not match. Photographs, wich Faulhaber has taken 2008 while a visit to Cuba of decaying and useless buildings, he combines with texts that come from a brochure for luxury homes in Florida. Only the locations were changed, so now luxurious and desirable properties in the "Boom Town" Havana are advertised. In a subtle way Faulhaber questioned the potency of images and their subtexts: "At a time when all that we encounter read as images or symbols and take in every situation assessment requires, what really stands behind it, also works of art because in this new concept of image to acquire." (Christoph Faulhaber)

In a second focus of the exhibition Faulhaber presents his project "cooperatives" which was considered at the "Art & Architecture" - cooperative competition Kalkbreite in Zurich on 1 Price (240,000 CHF). "With the unanimous choice of Faulhaber's proposal, the jury selected the most consistent and also most radical proposal." (PR release of the cooperative Kalkbreite)